Pacific Airlift, Inc. enjoys a long and storied history in the transportation of animals to and from Hawaii. Many articles in major magazines and newspapers have been written about this company and its founders.

Originally started in the late 1950’s to transport their own livestock back and forth by boat, Bill Eby of Maui and Bill Verdugo of Clovis, California formed the nucleus of Pacific Airlift, Inc. because they could not find anyone to ship their animals satisfactorily and safely.  Because both men were stockmen first and foremost and then animal transportation specialists, they always tried primarily to look at any shipment from the standpoint of the safety and well being of the animals.  This theory still guides the company today. 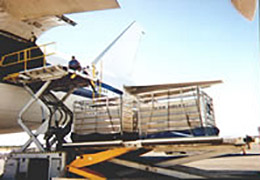 In 1987, Bill Verdugo was awarded the first ever, Pioneer Award for Animal Air Transportation Association Service for his foresight into the safe and humane treatment of horses during air transport.   The fact that both Bill Eby and Bill Verdugo were well respected stockmen in there own regards made it easy for ranchers and horse owners to entrust them to help with the purchase and shipment of animals for many ranches and horse operations in the Islands.

In 1973 Vince Genco joined the operation after graduating from Cal Poly, San Luis Obispo, in animal science.  With the passing of Bill Verdugo in 1998, and Bill Eby in 2007, Vince Genco has been responsible for the day-to-day operations in Hawaii and California. 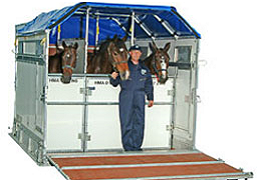 Although horses and cattle are still the main passengers for Pacific Airlift, Inc., over the years they have also flown elk, llamas, hogs, sheep, goats, cats, dogs, birds, monkeys, alpacas and yes, even buffalo.

From the late 1960’s to the early 1990’s all the flying was done three to four times a year with a DC-8 Charter to Honolulu and Hilo from Oakland, California.  Since the early 1990’s, the operation now utilizes the daily service of a 747 aircraft between Los Angeles, California to Honolulu, Hawaii.   Horses are flown twice a month with no more than twelve (12) head per shipment either direction, and are accompanied by our experienced Veterinarian and Livestock Handlers.   Cattle are flown to and from Hawaii on an as needed basis. 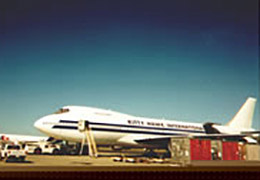 Cost of shipping cattle by air might seem somewhat higher than by surface, however, if the factors of time in transit, shrink, and injury are inserted into the equation, flying cattle from Hawaii is very competitive with ocean rates.

In the 50 plus years the people of Pacific Airlift, Inc. have been involved with the Hawaii ranching and horse industries, they have made many friends and many good relationships.  We look forward to making more friends and customers in the Twenty-First Century.